“Russian – Western relationship crisis is increasing. How the expert union can help?”

The main topic of international conference “Baltic forum” remains problems, opportunities and prospects of relationship between European Union and Russian Federation. In the last years these relationships have had downward dynamics which, however, should not weaken the efforts of their revival, and at least normalization. On the way to this goal new influences on the European continent are capable to provide both positive and negative boost. Last year, 2016 saw accrual of global and religious, economic and political instability and weak predictability of the developments.

Donald Trump’s victory in presidential elections in the USA created abundant uncertainties for EU’s positioning in global affairs. United Kingdom’s withdrawal election results from the European Union really left the elite and government institutions on both sides of the Channel in the state of shock. On the threshold of important elections in Germany and France, the developing circumstances in other major Union member states is anything but simple. Inner turbulence will only be amplifying vibration throughout EU.

Add to this increasing influence of populist sentiment across the Union. Traditional political actors begin losing to the newcomers – it must be noted though, not always and not everywhere.

Having said that, fragility of the border between stability and power of monopolies seems even more worrying than the elevated voice of populism. In many countries increasing disappointment of the public in state politics, costs of their decisions to participate in various international unions, like EU or NATO, and most of all – imbalance between hopes and return from these decisions. Monopolization of power limits the choice of the public for expressing such disappointment using democratic techniques.

Current state of relations with Russia is far from encouraging solutions for many problems of the European Union. Stability of perimeter borders, dynamic development of economic and trade relations, successful common plans for general security threat neutralization and many more fall under key interests of the EU.

The same refers to Russia. European Union remains the major trade-economic partner of Moscow, regardless of the significant reduction in commodity circulation and mutual sanctions. For Russia, political and humanitarian dialogue is also crucial – especially considering EU’s position in the international arena and historical and close contacts between the citizens. Thus, finding mutually approved compromise to the list of problems between the two parties is in extraordinary high demand for it.

Respectively it is necessary to continue saturated dialogue of experts drawing special attention to current issues. Representatives of the USA as usual have to be invited to this dialogue with their flagship role on the European continent. However, it is not easy – since during maximum level of global turbulence, the least experienced and difficult to predict leader in all post-war period has taken charge of the USA. Yet, on the other hand – political elite of the country is divided like never before and endeavours in finding internal enemies rather than way out of emerged circumstances.

Forecast for year 2017 is discouraging: so far there are no indications that positive change and tension reduction in world politics is awaiting us. Rather the other way round – destructive tendencies of the last year are going to remain and proceed with further escalation.

A year of presidential election has begun for Russia and judging from the latest events political activity and protesting movements are gradually intensifying. Likewise, external geo-political factors are definitely going to exert an impact on the every-day life of this huge country.

Considering the above mentioned, “Baltic Forum” believes that it is relevant to remind about another memorable date – the thirtieth anniversary of the international conference of widespread social movement Chautauqua‑Jurmala in Latvia, which in 1986 was devoted to normalization of the relations between USSR and USA.

Back then the conference played far from the least important and for most part not yet estimated role in making two severely confronting parties to relieve the strain and even brought them to cooperation in the future, first of all, in cutting down nuclear arms race. It also played important role in promoting the later following political processes of post-Soviet space democratization.

Similarly to historical thirty-year experience, such social initiatives born in small European countries, as international association “Baltic Forum”, can once more have a major impact on at least a discussion of most urgent issues of regional and even global scope and development of mutually acceptable solutions.

“Baltic Forum” expects answers from its guests on the upcoming conference to questions on – how to develop economical cooperation between USA, EU and Russia, as well as how to improve institutional cooperation and achieve common goals in the field of international security? 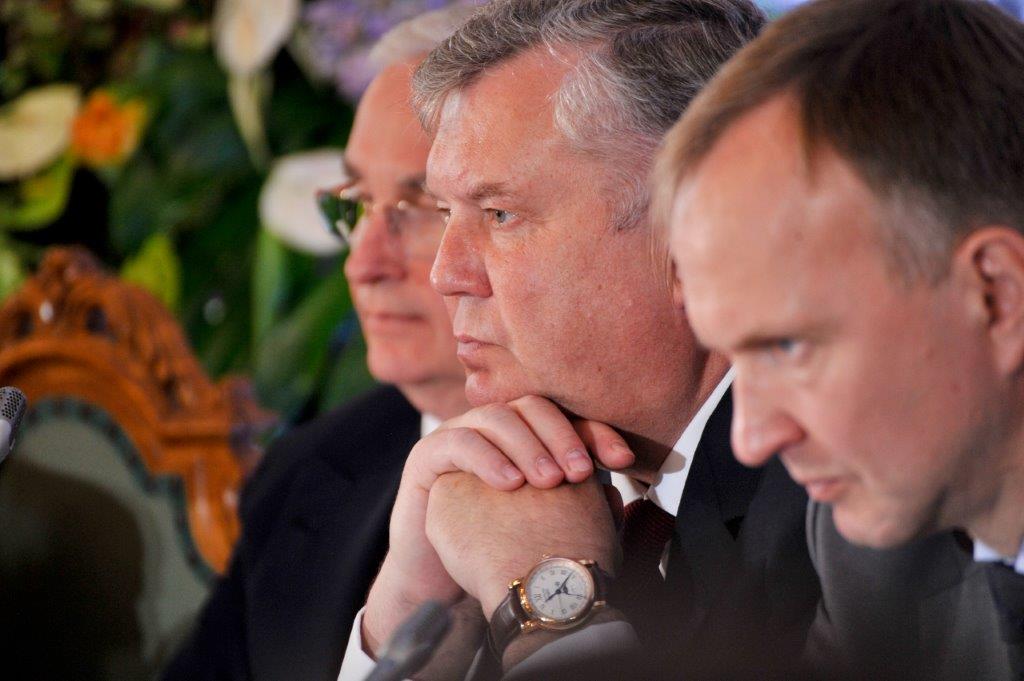 Juris Paiders - president of the Union of Journalists, Latvia

Andrejs Pildegovičs, State Secretary of the Ministry of Foreign Affairs

Alexander Dynkin - Director of the Institute of World Economy and International Relations (IMEMO) of the Russian Academy of Sciences, Russia

Paul Révay – Member of the Board of Trustees, "Friends of Europe" (Think Tank), Belgium

Matthew Rojansky - Director of the Kennan Institute at the Woodrow Wilson Center, USA

Nadezhda Arbatova - Head of Department of European Political Studies of Institute of World Economy and International Relations of the Russian Academy of Sciences (IMEMO), Russia

Pal Tamaš – professor of the Institute of Sociology, Hungarian Academy of Sciences, Hungary

Sally Painter - Co-Founder and Chief Operating Officer, Blue Star Strategies, LLC; Member of the Board of the Atlantic Council, USA

Sergey Kulik - Director for International Development at the Institute of Contemporary Development, Russia