The International Conference of the 'Baltic Forum' 2012

On 25-26 May 2012, the Baltic Forum held its annual conference. This year the program of the ‘Baltic Forum - 2012' was based on the discussion of the most topical international changes and the possibility of their evaluation, as well as on issues of long-term development of the global and regional economy.

The Annual Conference of the ‘Baltic Forum' is a regional international discussion platform established over the past 1.5 decades, where competent expert level exchange of views and ideas on current issues of global and regional policy is possible.

As indicated by the experience of many years, the real ‘value' and the impact of the international conferences of the ‘Baltic Forum' especially increases during the times of global and regional crises. In such periods like in no other times formal and informal exchange of opinions and attempts to understand and appreciate the position of the key players in the world are especially important. In 2012 this moment has set in again.

The year 2012 is a year when the disparity between the old ways and practices of the 20th century and the rise of new power and influence centers has started to mean that the world has already entered the era of unstoppable fundamental change, when the international community will have to revise the global order established decades ago and correlate it with the challenges of the 21st century.

The year 2012 is destined to become the year of radical changes both in the global and in the international world order, the year of the beginning of fundamental transformation of the global financial systems in general and those of the euro area in particular.

For such major global players as Russia and the U.S. the year 2012 will become the year of anticipation of domestic policy changes, which will have international consequences, which as yet have not been completely comprehended by the expert community.

This year the program of the ‘Baltic Forum - 2012' was based on the discussion of the most topical international changes and the possibility of their evaluation, as well as on issues of long-term development of the global and regional economy.

Geopolitical transformation in the Southern Mediterranean, opportunities and impact of risks of the Middle East on the economy of the EU, Russia and the Baltic States.

Anticipated changes in this vast and presently explosive geographical area will inevitably affect all areas - economy, transport, energy, etc., and will inter alia influence the solution of the regional security issues of the countries that border with Libya, Egypt, Iraq, Israel, Syria, Iran and Afghanistan.

These changes may directly or indirectly impact the general principles of co-operation between Europe, USA, Russia and China in respect to the issues of combating international terrorism, organized crime, drug trafficking and human trafficking.

The exacerbation of the situation in the Middle East, and particularly the transformation of limited armed conflicts into overt warfare will directly influence the changes in world prices for energy and raw materials and will have an adverse effect on the potential of both global and regional development.

Possible changes in the internal policy of Russia, the U.S. and other countries. The impact of these changes on international bilateral and multilateral relations.

The possible political consequences of the completion of the era of Dmitry Medvedev's presidency and restart of Vladimir Putin as the head of the State of Russia. The urgent need to initiate the pending political reforms in Russia and the topical issues of relations between Russia and the EU.

The risks of the pre-election year in the U.S. and the most probable models of the U.S. foreign and domestic policy. Assessment of their manifestation and effects on the near and more distant perspective.

Challenges of the global crisis and the issues of increasing the competitiveness of Europe.

The anticipated changes in the EU will become a considerable challenge both to the global and all-European development. The crisis of the euro area, which in 2011 became the world's largest financial problem, marked a fundamental turning point in the development of the EU.

For many years the European Union has been the flagship and model of democracy and tolerance. It demonstrated successful development of a regional cooperation and collaboration system to other countries on its own example. However, the financial and economic deadlock, which the euro area entered at the end of 2011, reduced the attractiveness of the EU to an unprecedented level in the eyes of the rest of the world and spawned many doubts in the longevity of the European Union.

The issues of the European policy for establishing and strengthening of bilateral and multilateral good neighborhood relations in respect to the Baltics - Belarus and the Baltics - Russia require serious discussion as well.

Prospects for economic co-operation of the European and Asian countries and search for common responses to global challenges.

As regards the overall potential of the GDP China has already become the second largest world economy. In the coming years other political and economic components will also be added to the rapidly growing economic potential of China. Already in the foreseeable future they will bring to the country the status of one of the leaders on the planetary scale both in respect to the huge accumulated financial resources and in the area of the strengthening military potential.

Similar processes can be observed in the development of India, Brazil and other players, who are strengthening their positions. At the same time the order of decision-making in the UN and other influential international organizations or the distribution of global financial flows with the participation of the International Monetary Fund and the World Bank has been developed in the mid-20th century, in the era when the leaders of this century were poor and financially insignificant countries.

How will the changes in the global balance of power affect the economic development of the countries participating in the conference? What configuration will the main and most efficient international transport corridors take? How will global changes affect the development of energy, the distribution of raw materials and water resources, the international division of labor? How will the rapid processes of change taking place in the world affect the improvement of education, the development of science and technology? All these issues require urgent attention and detailed discussion.

The alternatives of ensuring global and regional security should not be left without a discussion by the forum participants either. What is the most optimal route of change: to improve and develop the existing security structures or to look for new ways and mechanisms to ensure effective international cooperation?

Let us not forget that traditionally the questions, answers to which we seek to obtain during our conference, will be more on the practical than on the theoretical plane.

All reports are available in Russian  here.

'BF' in the Crimea: International seminar

Problems and Prospects for Regional and Innovation Development Latvia and the Crimea: the exchange of experiences and opportunities for cooperation

At the invitation of the Verkhovna Rada of the ARC and with the assistance of the Baltic Institute for Strategic Studies and Innovation (BISI), under the auspices of the international expert community the Baltic Forum, an international seminar on 'Problems and Prospects for Regional and Innovation Development Latvia and the Crimea: the exchange of experiences and opportunities for cooperation' was held in the Crimea on October 5 and 6, 2012.

Up to the present time, the international conferences of the Baltic Forum were traditionally held in Riga and Jurmala, as well as in Moscow and St. Petersburg, however this year the geography of its activities has expanded to an even greater extent, and a seminar devoted to the topical issues was organized in the Crimea (Ukraine).

At the seminar, which was attended by the heads of the local governments of Latvia and the Crimea, by experts, politicians, journalists, special attention was paid to regional and urban issues.

A lively discussion on the subjects of 'Small towns as centres of innovation development: opportunities, challenges and prospects' and 'Latvia and the Crimea: the regions for European development. Exchange of experiences and cooperation prospects' took place. The opportunities to share experiences in the field of regional development, to discuss the future of small towns, participation of the entrepreneurs from Latvia and the Crimea in joint innovation projects in the framework of the cooperation programs of the EU and its closest neighbouring countries evoked special interest.

The seminar was attended by Verkhovna Rada of ARC member Sergei Aksenov, chairman of the parliamentary committee on public administration and local governments of the Saeima of the Republic of Latvia Sergei Dolgopolov, director of the Baltic Forum Alexander Vassiliev, Mayor of Rezekne Alexander Bartashevich, Ph.D., Geography, president of the Latvian Journalists' Union Juris Paiders, director of the Institute for Strategic Community Development 'Small Towns', member of the European Club of Experts, Alexander Balobanov, PhD (Geography), ass. professor Monterey Institute of International Studies (Monterey, California), Defence Language Institute (Monterey, California), visit-professor Portland State University (Oregon), leading researcher for the Russian Presidential Academy of National Economy and Public Administration Alexander Levintov, on behalf of Verkhovna Rada of ARC, the Chairman of the Expert-Analytical Board of the Council of Ministers of the Crimea, Advisor to the Chairman of the Verkhovna Rada of ARC Alexander Formanchuk presented at the Baltic Forum.

At the closing of the seminar the participants of the Baltic Forum in the Crimea called for the establishing of a new good tradition: to hold a seminar on the most relevant issues in early October on the Crimean land and to invite to the Forum a wide range of experts, scientists, researchers, senior government officials and leaders of the local governments of the Crimea, Ukraine, Russia, Latvia and other countries of the European Union.

The forum brought together approximately 200 leading printed and electronic media executives, leaders of the national journalists' unions, chairpersons of influential international journalists' structures, professionals in the field of information, politicians and bloggers from the CIS countries, Georgia, Belarus and the Baltic states.

The National Development Plan for 2014 to 2020 has been presented for public discussion in October, 2012. The Baltic Forum announced a contest for an Alternative Sustainable Development Strategy of Latvia.

On 25-27 March 2012 Professor at the National Research University Higher School of Economics, Deputy Director General and Head of Research at the Russian Energy Agency under the Ministry of Energy of the Russian Federation Leonid Grigoryev, who is also a longtime partner of the Baltic Forum, visited Riga with course of lectures "Mild recession in 2012 and debt problems".

Club meeting for Editors in Chief from CIS countries, the Baltic States and Georgia

The first club meeting was held on February 10 in Kiev, capital of Ukraine, where the director of The Baltic Forum Alexander Vasilyev took part. The meeting was held in the spirit of getting acquainted, the editors-in-chief talked about the mass media of their countries and their condition, as well as outlined future plans and intentions. On February 11 in turn the Ukrainian Prime Minister Nikolai Azarov held a press conference. The members of the club also took part in it.

The first club meeting was held on February 10 in Kiev, capital of Ukraine, where the director of The Baltic Forum Alexander Vasilyev took part. The meeting was held in the spirit of getting acquainted, the editors-in-chief talked about the mass media of their countries and their condition, as well as outlined future plans and intentions. 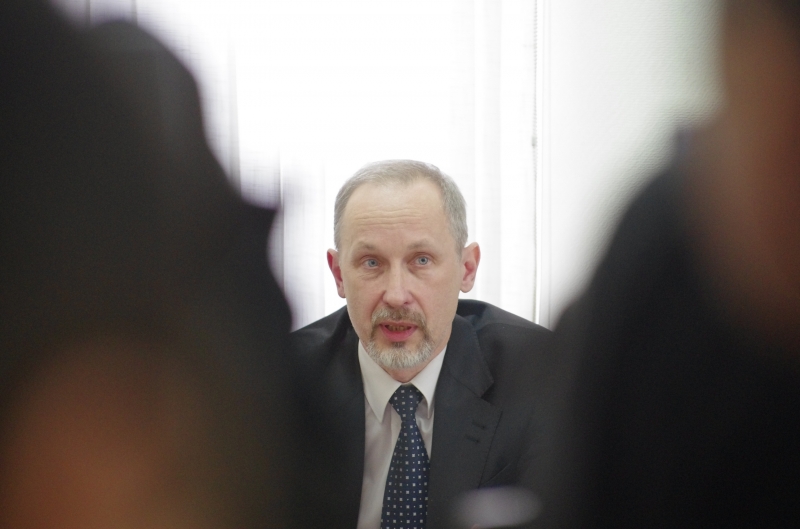 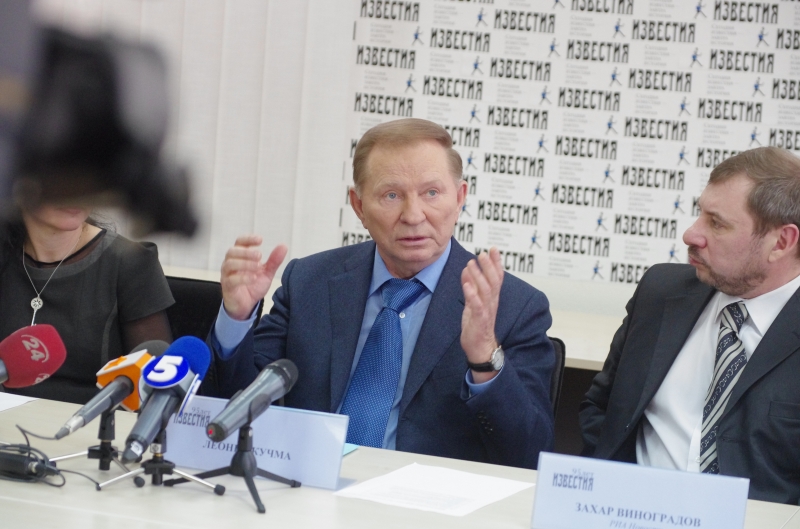